Rules relating to surplus credits and payments. The proposed amendments provide new rules for when a province is removed from the OBPS including:

Rules relating to quantification and verification. The proposed amendments will: 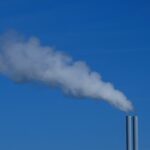